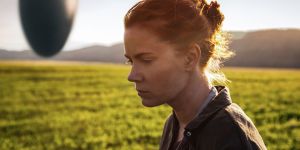 Oscar season is an exciting time in the film industry.  This year things are more exciting than usual for Dave and I. Arrival, the wonderful film we worked on last year is up for a number of awards, including best sound editing!

We were incredibly grateful to be  involved with this fantastic project. Denis Villeneuve  is a brilliant director and an inspiration to work with. Joe Walker, the awesome picture editor, has a great sensibility for the role of sound in film and we worked very closely with him on this project.

Sylvain Bellemare and the rest of the team in Montréal did a fantastic job on the sound too. Dave and I  didn’t get to see their work until we saw the film in the cinema. There were moments of sound that literally took my breath away, so my hat is off to them. They certainly deserve all the praise they are receiving for their work.

Dave and I were working remotely from New Zealand and actually started work very early in the production. We were fortunate to be given the exciting task of designing the language for the aliens, which is like being asked to decorate an incredibly delicious cake. There was so much scope for creativity in this job and since we started early on the project, much of our sound design influenced the VFX and the movement of the aliens.

Jóhann Jóhannsson’s music was incredible, as always. We were lucky enough to have access to the score at an early stage, so we were able to wrap our sound around the music. This makes a huge difference when you are designing sound that is very tonal in its nature. Often as a sound designer, you have to stay away from making sounds too tonal as they can clash with the music. However, we were able to create tonal sounds in a way that meshed with the score cohesively.

Designing sounds for creatures is one of my favourite things to do as a sound designer. At the moment, I am busy making a lot of robotic sci-fi sounds for the exciting game that I’m working on, so making organic creature sounds for Arrival was a nice change of pace.

The Heptapods in Arrival were such amazing aliens. Denis wanted their language to be unlike anything else. More than anything he wanted them to sound grand and sacred. At times they should sound intimidating and almost aggressive, without ever sounding ‘monster-like’. So our approach was a bit different than creating sounds for orcs or dragons. I thought of them as being like giant redwood trees, awe-inspiring and ancient. Although you might not think a tree can talk, you can get a sense of what they ‘feel’, and the immense sense of time that they represent.

This is the first time I have worked on the film that has been nominated for an Oscar for best sound so this is a huge step for me in my career. The film has also been nominated for best sound in the BAFTA awards as wall as the MPSE’s. Dave and I are hugely disappointed that we can’t go over to be there for the award ceremonies. We’re busy on other projects that have deadlines coming up, but we will be cheering for Sylvain from our home in New Zealand. We will also be sending luck to Denis and Joe and all those nominated for awards in other categories for this remarkable film.