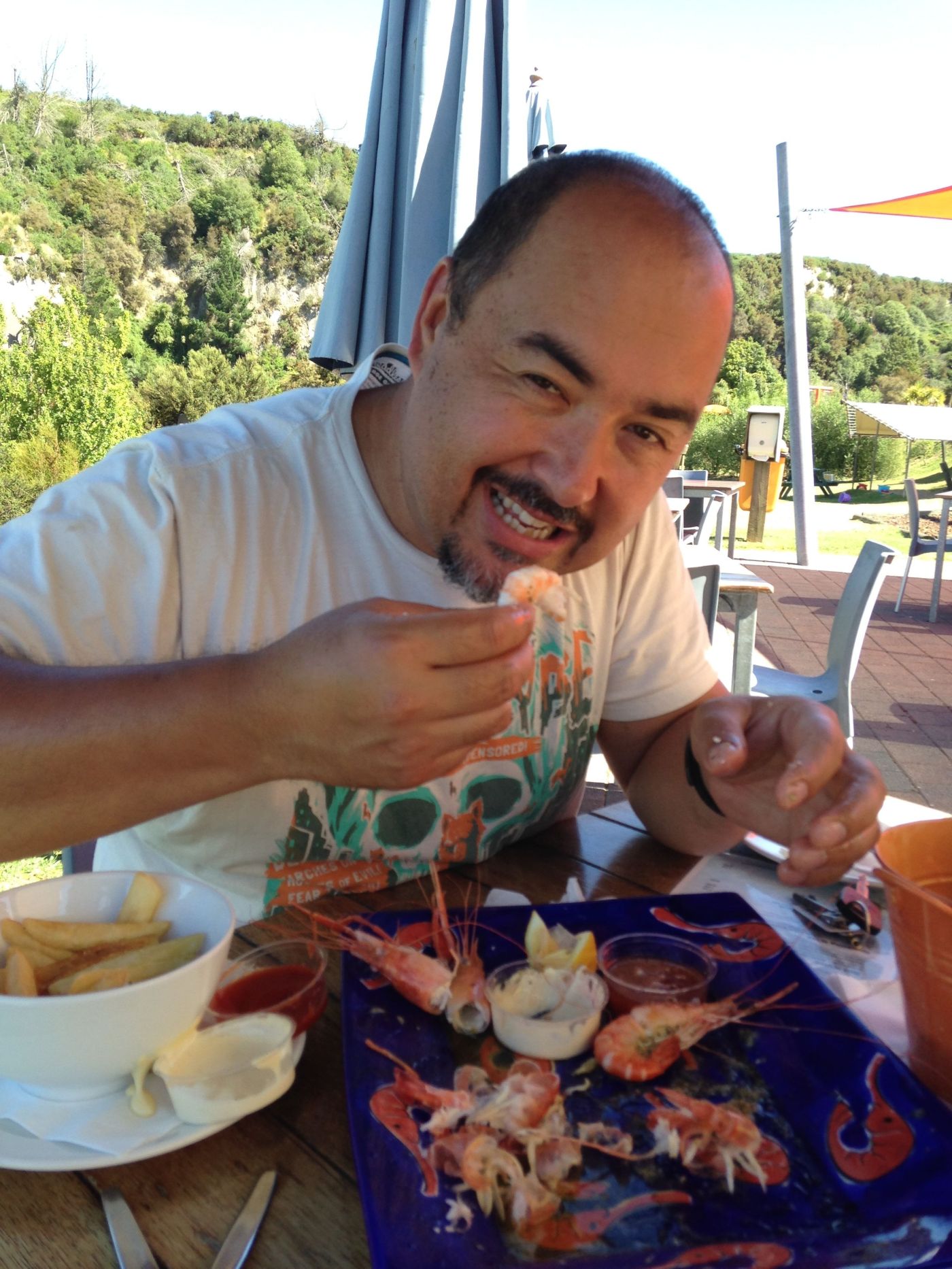 Day three of the January record mission and oh what a day!
Before we left Turangi, we stopped in at Tokaanu wharf at the edge of Lake Taupo. We had seen hundreds of swans on the lake the night before and thought, sweet, we’ll come back at dawn with a loaf of bread and get some sounds of a swan feeding frenzy. Wrong. Turns out Taupo swans don’t give a crap about bread, must be all the trout.

So then we thought, lets go check out the trout farm and see what all the fuss is. We recorded a few bits and pieces there of water drains and that sort of thing, which was all very nice. However, the sight of all those giant trout got us hungry again, so we had no choice but to journey north to the Huka prawn farm at Huka falls!

Because…all work and no prawns makes Dave a dull soundie! (Oh and some mighty fine cheesecake too…and some wine…why not?) 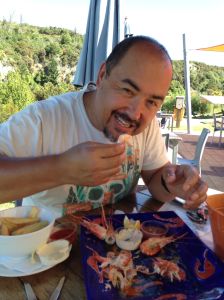 We did stop on the way at some magnificent pine along Kiko road at Motuoapa. We recorded some excellent forest ambience with hardly any cicadas. Simply stunning weather and tranquil surroundings made for a perfect mornings work.

After our lunch at Taupo we decided we should go back and record the same forest at night…you know to avoid all the cicadas. Little did we know, the day time bugs were actually no where near as hectic as the night time summer bugs! Giant Huhu beetles flew everywhere, smashing into your face was one thing, 3 million mosquitos setting up camp in our car was another. We ended up spending a lot of time working in the dark. But it was a good night and we got some great sounds including some excellent forest crunches and wood breaks.

Here is a nice pic of Dave, mid-log smash. Nice one, Dave. 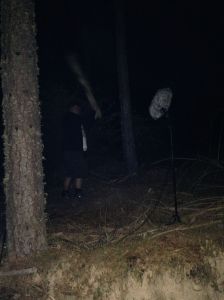 Sitting in the dark of that forest my mind once more began to wander. I tried to work out what made it feel so creepy. I figured that perhaps it was because the forest would someday be harvested. Since it was a plantation of pine and it was mature, I knew that it’s time of being a beautiful sanctuary of life was soon to end. It was like being in a future graveyard. All the insects and birds that called the forest home, would one day suffer the chaos and destruction brought by the loggers. Even though I think plantation forests are a good and economical resource, it’s still sad to see nature destroyed.

The very first place on our record list for this trip was a forest near Turangi we had recorded once before. When we arrived, however, it was a vast field of dead stumps, piles of dirt and tractor marks. The scene was both sad and gross, reminding us not only of the fleeting transience of life, but also that you’ve got to record what you can when you can, because you never know when it will be gone.